Skip to Main Content
It looks like you're using Internet Explorer 11 or older. This website works best with modern browsers such as the latest versions of Chrome, Firefox, Safari, and Edge. If you continue with this browser, you may see unexpected results.

"Microaggressions are the everyday verbal, nonverbal, and environmental slights, snubs, or insults, whether intentional or unintentional, that communicate hostile, derogatory, or negative messages to target persons based solely upon their marginalized group membership. The first step in addressing microaggressions is to recognize when a microaggression has occurred and what message it may be sending" (Diversity in the Classroom, UCLA Diversity & Faculty Development, 2014). 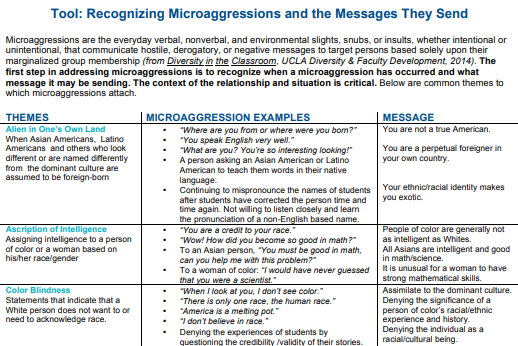 The racist roots of American policing: From slave patrols to traffic stops

Tensions between the police and black communities are nothing new. There are many precedents to the Ferguson, Missouri protests that ushered in the Black Lives Matter movement. Those protests erupted in 2014 after a police officer shot unarmed 18-year-old Michael Brown; the officer was subsequently not indicted.

A Brief History of Slavery and the Origins of American Policing

The birth and development of the American police can be traced to a multitude of historical, legal and political-economic conditions. The institution of slavery and the control of minorities, however, were two of the more formidable historic features of American society shaping early policing.

A selection of scholarship from Project MUSE publishers on the history of structural racism in the United States and how the country can realize anti-racist reform. The deaths of George Floyd, Breonna Taylor, Ahmaud Arbery, and countless others at the hands of structural racism have shone a spotlight on racial violence, police brutality, and the deep systemic issues that enable it.

Duke University's Samuel DuBois Cook Center on Social Equity:
"What We Get Wrong about Closing the Racial Wealth Gap"

Across the nation, children of all backgrounds are experiencing a time in which discussions about race, gender, gender identity, sexual orientation, religion, and culture are at the forefront of their everyday lives. Many people avoid these discussions because they fear that conversations about race, bias, and racism lead to feelings of anger, guilt, discomfort, sadness, and at times disrespect. Explore this resource to learn more.

How to Shift from Hostility to Empathy in Political Conversations
In tough conversations, science suggests a way to bridge divides and foster understanding: by appealing to other people's values.
BY NATIONSWELL AND THE GREATER GOOD SCIENCE CENTER

Systemic racism affects every area of life in the US. From incarceration rates to predatory loans, and trying to solve these problems requires changes in major parts of our system. Here's a closer look at what systemic racism is, and how we can solve it.

Letter to My Son

"Here is what I would like for you to know: In America, it is traditional to destroy the black body- it is heritage." And have brought humanity to the edge of oblivion: because they think they are white. Son, Last Sunday the host of a popular news show asked me what it meant to lose my body.

"The Cycle of Socialization helps us understand the way in which we are socialized to play certain roles, how we are affected by issues of oppression, and how we help maintain an oppressive system based upon power" (Adams, M., et al., Readings for Diversity and Social Justice, 2018). 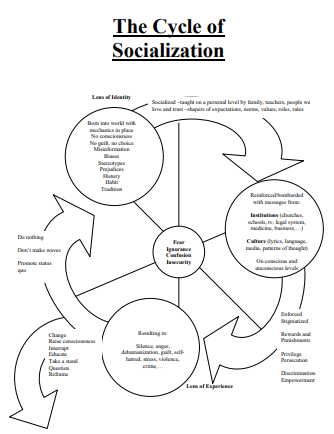 A History of Race and Racism in America, in 24 Chapters

by Ibram X. Kendi, for the New York Times Click here for PDF During our investigation to find materials that would allow for further research into the historical impact of slavery in the United States, this selection from Dr. Ibram X. Kendi was found.

Welcome to The Race Card Project! Send your six words on race

What you see here are candid submissions from people who have engaged in a little exercise. Here's how it works. Think about the word Race. How would you distill your thoughts, experiences or observations about race into one sentence that only has six words? Try it.

Start your journey by exploring one of the Talking About Race topics. Community building is something we do together to share perspectives, create brave space, and foster relationships. We are members of a community dedicated to ending racism. Let's build a national community and grow your local one.